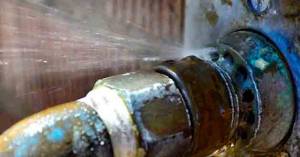 When a pipe bursts, the damage caused can be devastating. It’s not just the physical damage caused to the property that is a problem, but you can also lose precious objects and things of sentimental value. Nor is the damage from a burst pipe confined to what is immediately obvious.

Sometimes the water damage can be more extensive than your direct observation leads you to believe. Water can seep down into hidden crevices and cracks, causing damage that may take quite a while to become noticeable. In fact it could be years after you think your home has been restored to its normal condition, when suddenly it collapses around you!

Why Do Pipes Burst?

Although there are many reasons for burst pipes, the most common is freezing. When the water running through a pipe drops to almost freezing in temperature, it expands and this causes the pressure inside pipe to increase. When the pipe is no longer able to contain this pressure, it bursts.

How We Can Help

That is obviously a fate you will want to avoid, which is why it makes very good sense to hire a professional loss assessor to help you accurately assess the damage your property has sustained, make the proper claim to the insurance company, and then make certain that you get your full entitlement.

Loss assessors have an in-depth knowledge of the insurance industry, and also receive specialist training in making accurate assessments of the damages that have occurred. And unlike yourself (hopefully) they have to deal with burst pipes all the time, as it’s a very common occurrence, particularly during winter. This means they have plenty of experience in understanding exactly what potential hidden damages may have been caused by the burst pipe, including things you probably would not have thought of.