How to Prevent Burst Pipes

Pipes can burst for all kinds of reasons, and also water pipes may be made from different materials, so that can affect both the tendency of them to burst and the causes.

The most common cause of burst water pipes is freezing. This will affect both metal and plastic pipes, while pipes made from more flexible materials or concrete will be less likely to be affected. 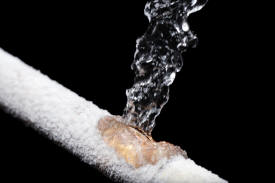 In the case of metal pipes, which are certainly the most commonly installed pipes in older households, the problem is doubled. Frozen water expands and cold metal contracts. This puts a lot of stress on the structure of the pipe, and it may rupture. Plastic pipes may become more brittle when frozen, and because the material is softer than metal, it will crack more easily.

When the ice inside begins to melt, normal water pressure will return, so water will come spraying out of the pipe, potentially flooding your home and possibly leading to other dangers such as electrocution or an electrical fire. While it sounds bizarre, this is one of those rare situations where your home could be destroyed by fire and flood at the same time.

Pipes can be insulated with lagging, and since this is so simple and inexpensive, it is amazing that pipes are not lagged by default, and just as amazing that homeowners don’t make up for that lack by lagging retrospectively.

While it’s not impossible for moving water to freeze (glaciers, for example), it does not freeze as easily as still water. Lagged pipes make freezing even less likely. So one thing that will help to reduce the chance of water freezing in your pipes is to leave the tap open to a steady drip. However, you will also have noticed two flaws in this approach. In most places water is not free, and there is an environmental cost to wasting water. So you should plan how you are going to divert, store, and use the water that you are running, or it will just create a problem of a different kind.

If you’re not going to be home, you could consider turning off water at the supply

If there is no water in the pipes, it can’t freeze. You can turn off water at the supply before it enters your home, remembering to also open all the taps to let out any residual water still inside the pipes. Obviously, if you’re going to be home, this is rather a silly thing to do, but if you’ll be away for a long time, it may be worth it. Don’t forget that when you turn the water back on, there will be air inside the pipes, so you need to be prepared for that.

When you are home, keep the place warm

A warm house has warmer pipes than a cold house. The benefits are obvious.